Art is said to tell one hundred thousand stories without saying a word. We are surrounded by the most beautiful art pieces in the world, on walls and alleyways unknown to us and by illustrations that retell forgotten stories of places and times gone by. Artists are those who with a brushstroke reenact time as it once was.

Ekaterina Sheath is a visual storyteller, and we at Dock Street Signs have collaborated with her community illustration project. We assisted by producing and installing Aluminium Composite Panels adorned with Ekaterina’s designs onto the windows of the New Pavilion.

The project was commissioned by Leeds City Council and Morley Town Council, as part of Morley Towns Fund, to revive The New Pavillion which has been a prominent building in Morley since 1911.

Ekaterina Sheath – About The Artist

Ekaterina Sheath is a student of visual arts pursuing her Bachelor’s degree in Illustration at the Leeds Arts University. She is a passionate art enthusiast who perceives illustration as a way to celebrate untold stories and as an instrument to preserve local spaces as cultural assets.

The New Pavilion – A Brief History

The New Pavilion has been the heart of entertainment in Morley since 1911 with one of the earliest acts to grace the stage being Vulcana the Strongwoman and her partner Atlas. A feminist icon of her time, Vulcana championed exercise for women and lobbied against restrictive corsets. With just one hand, she could lift a man!

In 1938, 12-year-old Ernie Wise, later of comedy duo Morecambe and Wise, delighted Morley audiences with his tap dancing and jokes.

In the 1950s, the theatre became a cinema, full of youngsters and couples watching Roy Rogers movies. It was an era of smoking indoors, couples ‘courting’ in the back row, and cheeky children tucking into ice cream. On the way home, they enjoyed fish and chips as a special treat for tea.

The cinema transformed into First Star Bingo in 1968 and later Walker’s Bingo in 1984. The hall was alive with calls of “Two Little Ducks” and “Cup of Tea” for over 20 years.

In 1990 the building became the After Dark nightclub, which hosted world-famous Orbit techno nights. At its peak, Orbit was on a par with the Berlin scene and attracted star DJs and clubbers from across the country.

The New Pavilion’s final chapter was as an Italian restaurant that closed in 2009.

The Aim Behind the Design

The primary aim of Ekaterina was to bring out the untold history of the New Pavilion building and help the youth connect with it. Along with that, she tried to portray the unturned pages of nostalgia that surround the unused building.

Her colourful and quirky illustrations of a ripped cinema ticket, a couple in love at the cinema, a little child’s head peeping at Grandma’s bingo card are all snippets of stories and details shared by the community of Morley.

The abstract-shaped figures depict the stained-glass windows, ornate gates, and the sculpted facades of this epitome of entertainment and culture. However, the front entrance and the windows of the distant sides depict the present days’ Morley blending past and present together in colours.

As their business has gone from strength to strength, the institution that is King Koby needed an additional venue to cater for the demand. The boys from King Koby approached us to sort out all signage for their new shop above Denham in Leeds City Centre. With a full window front and full tiled wall, we had two great canvases to work with to show off Koby’s strong brand. For the window vinyl, we reverse cut the logo out of black vinyl and used a bronze vinyl as the outline of the letters for more impact. The logo was then surrounded by various shapes and emblems that represent the King Koby Culture.

On the inside of the shop there was a full white-walled tile that was screaming out for some contrasting black vinyl on there. We used a special type of vinyl here which contours to ridges and curves. The end result was strong, with KING KOBY GLORY DAYS displayed proudly.

We thoroughly enjoyed working with King Koby, a great bunch of lads who are clearly passionate about their work and the brand. To read more about the King Koby story and see what they do, visit kingkoby.com.

If you are looking for signs in Leeds, window vinyl or interior signage, browse our website or email us – info@dockstreetsigns.co.uk

We recently worked with Rewards Gateway on brand new internal signage in their Birmingham Office. The guys had a clear idea of how they wanted their branding and company message communicated across the office and asked Dock Street Signs to manufacture and install the signage. We used a mixture of printed vinyl which was matt laminated, cut vinyl and etched vinyl. See our gallery below – 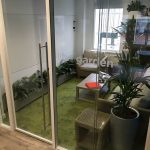 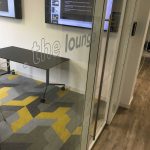 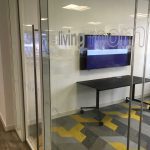 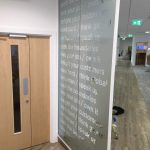 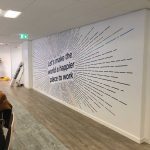 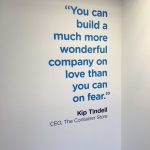 As you can see from the photos, printed vinyl on a full wall can have a great visual impact, it’s eye-catching and emphasises the brand values to everyone who walks past. We provide our wall vinyl with a Matt Lamination as standard – this helps protect it from scratches and marks from passing traffic.

Rewards Gateway also chose etched vinyl for their meeting rooms and entrance. Also known as frosted vinyl, it’s a great option for naming rooms, decoration and for safety. Because it still lets light through, etched vinyl is also great for full window coverage to provide privacy where needed.

Finally, we used cut vinyl to produce an inspirational quote on one of the walls in the office, this is a great option where you don’t want full wall coverage or have a painted wall.

If you would like to find out more about internal office signage, visit our product page – Etched Vinyl, Cut Vinyl, Printed Vinyl or get in touch – 0113 3226442 or info@dockstreetsigns.co.uk

Cut vinyl is a popular option to display many different types of things some of these include displaying opening times, job vacancies and branding. It is becoming more and more common for workplaces to have glass offices, which although look modern, can often mean there’s a problem with privacy. There is of course, the option to use frosted glass, but this is not always cost affective and requires a lot of time to produce and install.

Deciding what signage to display, as a shop or café owner in the busy centre of Leeds, is as vital to business success today, as it has ever been.

With the onset of social media and review sites, customers can know exactly where they are heading before they even set foot in Leeds centre – even if they are travelling from Sheffield or Manchester. But there are plenty of potential customers who still make impromptu visits. According to market research, in February 2015 only 11% of internet consumers used social media to ask friends and family their opinions on which food or drink venue to frequent. And only 13% followed a food/drink venue on social media.*

Keeping your marketing and branding relevant and eye catching is really important if you’re trying to encourage potential costumers to recognise and buy into your brand. Printed Foamex display boards are one of the cost effective options you have to choose from.

One of Dock Street Signs’ favourite videos! Featuring the work of David A. Smith, this film captures the ‘Behind The Scenes’ creation of the ‘Born & Raised’ and ‘Queen of California’ artwork, as well as 2 unique reverse glass panels, hand-crafted in England.